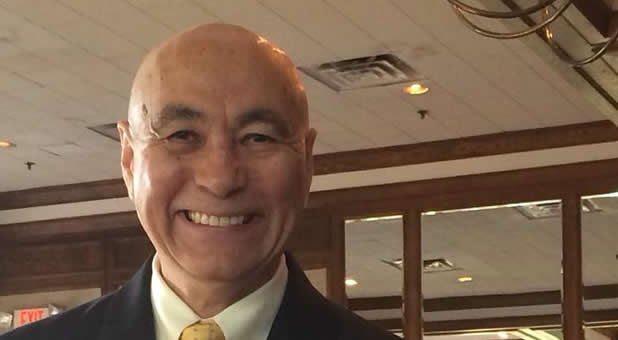 When he first learned of the diagnosis in April that he had been stricken with stage 4 B-Cell lymphoma, my good friend Doug Stringer’s first reaction wasn’t, “Oh God, why me? Why now?” No one could blame him if it had been. It’s a frightening proposition.

But as anyone who knows Doug, the founder of Somebody Cares International ministry in Houston, he’s a fighter. He won’t stand for seeing souls lost for eternity, and he certainly wasn’t going to accept what is essentially a death sentence without a battle.

“The first thing I thought was that this simply didn’t belong to me. I know that God did not put this on me,” Doug said. “I did ask God if my time was up. But I didn’t think it was. I prayed, ‘God, You know my appointed time, but I don’t sense that it is now.’ He told me that my healing is my calling, and that gave me strength.

“Along with myself, others have been calling for a great awakening in the church, and I believe my healing and the resurgence of the church are in direct correlation. It’s about the larger message. It’s about a time of intercession for the church of America and the healing of the spiritual cancer of our nation.”

As of Nov.10, Doug is officially in remission of the cancer that was supposed to kill him. God 1, Satan 0.

“I know that God did not put this on me, I did ask God if my time was up. But I didn’t think it was. I prayed, ‘God, You know my appointed time, but I don’t sense that it is now.’ He told me that my healing is my calling, and that gave me strength.”

Doug believes his obedience in continuing to carry out his calling—and the fact that he continued to focus on others instead of himself—are big reasons why he’s still around and is stronger than ever to help spearhead the spiritual transformation of America. He’s one of the major forces behind The Response: A Call to Prayer for a Nation at a Crossroads. Several Response events are being held around the nation.

I’ll talk more about Doug in a bit.

And then there is Pat Williams, founder and senior vice president of the NBA’s Orlando Magic. Pat graciously dropped by our podcast studios here at Charisma Media for an interview for our “Javelin” sports show, and one of the topics he discussed forthrightly was his lengthy battle with cancer. Five years ago at 70, he was diagnosed with multiple myeloma and wasn’t expected to live more than two years.

It was a shock because no one in his immediate family had ever dealt with cancer.

Like Doug, Pat and his wife, Ruth, knew that feeling sorry for themselves wasn’t the answer, nor was it an option.

“I never heard Ruth say, ‘Woe is me or what are we going to do?’ Pat said. “She was always upbeat and encouraging, and that’s the advice I would give everyone else. No pity parties. Stay positive.”

Pat’s trek through cancer has been longer than Doug’s, but his faith is just as strong. And, as a motivational speaker, Pat knew people were watching him and how he handled the epic journey. He knew what he said and did would affect many people who have been inspired by the 100 books he has written.

“The real test comes when adversity strikes and setbacks nail you,” Pat said in his latest book, Extreme Winning. ”I had to stay enthusiastic, and I had to believe what I had been preaching all these years about my faith. I had to prove that I bought into my own message.”

“You hear the word cancer and you hear a death sentence,” Pat says. “So, I focused on my mission—remission—and I’ve stayed focused on it through the cross of Jesus. I was reminded of Luke 4:23 that says, ‘Physician, heal yourself.’”

At 75, Pat continues to be a major force in helping to bring an NBA championship to Orlando and continues to travel throughout the country as a motivational speaker.

Neither Doug nor Pat, both of whom went through rigorous chemotherapy treatments—ever figured they would be witnessing and ministering to cancer patients. But both have taken it upon themselves to motivate and inspire those diagnosed to fight through the disease and to trust God unconditionally through the process.

“It was a ministry I was thrown into, that I didn’t ask for or expect,” Doug said. “God opened wide the doors for this type of ministry. It’s about God’s great grace and His great power. God used my personal obedience, and He will use yours if you simply listen to Him and obey him.”

Coincidentally, this week has afforded me the opportunity to pray for a couple of our readers who have been waging their own battles with cancer. I pray that they, as well as others, find hope and inspiration in both Doug’s and Pat’s remarkable stories. You can read about Doug’s journey at dougstringer.com, and Pat’s at patwilliams.com.

If you or a loved one is dealing with cancer right now, please share this. Cancer diagnosis doesn’t have to be a death sentence. Ask Doug or Pat. And remember Proverbs 3:5-6: “Trust in the Lord with all your heart and lean not unto your own understanding. In all your ways acknowledge Him, and He shall direct your paths.”

And as I always like to say, “there is that.”

Shawn A. Akers is the online managing editor at Charisma Media. He is a published poet and published a story about Dale Earnhardt in NASCAR Chicken Soup for the Soul. You can read his blog here. To sign up for his newsletter, “Step Out of the Boat,” and other Charisma newsletters, click here. You can also listen to his podcasts, theJavelin Sports Show, on the Charisma Podcast Network.